I began to post a new article on this blog today, drawing from an article I posted many years ago on the Tutor/Mentor Institute, LLC blog. If you’ve read some these articles you’ll see that I embed many visualizations on the site, some of which were created by interns from South Korea, Hong Kong and India who came to me via college programs in the  US. 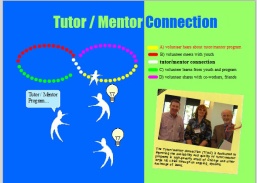 I was going to write about how I started leading a volunteer-based tutor/mentor program in 1975 and how, over many years, I’ve developed a clear theory of change.  To me, the goal of organized non-school tutor/mentor program was to create an organized framework that encourages volunteers to serve as tutors, mentors, coaches, advocates, friends, leaders in on-going efforts that make a life-changing difference for these kids. By life-changing, I mean that the kids will not be living in poverty when they are adults because they will have the academic, social/emotional and workplace skills needed for 21st century jobs, plus a network of adults who can and will open doors to jobs and mentor them in careers.

As I began tutoring in 1973 I began looking for ideas for what to do each week. As I became a leader of the volunteer program at Wards in 1975, I invited other leaders to share ideas with me and each other.  From this, I began to build an information library.

I used my weekly newsletter to encourage volunteers to learn from information in the library to support their own tutoring/mentoring and to show others how they could get involved and support the program.

This led to the formation of the Tutor/Mentor Connection (T/MC) in Chicago in 1993.  Its goal was to collect and share information that anyone could use to help build great programs in all high poverty neighborhoods.

I found that many people did not understand the T/MC, so I started creating illustrated ppt presentations to share strategy ideas in the 1990s and posted them to a page on the Tutor/Mentor Institute, LLC web site (http://www.tutormentorexchange.net)

In 1976 an intern from Hong Kong created a flash animation to communicate the information in one of my PPt.  In 2010 an intern from South Korea created a newer version.  Over the past 10 years interns from different countries have created flash animation presentations, to communicate these ideas. The two visualizations shown above illustrate a “service-learning” loop, which is described in this animation.

The problem is, some of these no longer work.

The first visualization link is at http://www.tutormentorexchange.net/images/flash/rebuild_real.swf  This won’t open for me.

The second visualization, created earlier, is at http://www.tutormentorexchange.net/flash/TMC_logic.html   As an earlier version, there is no voice narration to explain what you are seeing.

Over the past 2 years support for the /flash/rebuild_real.swf technology has ended. Any presentations created with this now don’t open. You can’t see the information.

And I don’t know how to transfer the presentations to another format.

I have several Adobe Flash animations embedded in my various web sites.  It’s a disaster for me that they no longer work.  I don’t even have the money to hire anyone to fix them.

I wonder how many other small social benefit organizations are in the same, sinking, boat.

UPDATE:  I’ve found a way to open most of my Flash Animation. Visit http://www.globfx.com/downloads/swfplayer/ and download the SWFPlayer. Then if you’re trying to open one of the animations on this page, right click on the link and say “open in new window”. If you have the swfplayer it will open in that application. If you get a warning message, say “keep”. Then click on the download and say “open”. It will open using the swfplayer.  That works for me, but how many viewers will take these steps?

3 thoughts on “Loss of Flash Animation – Disaster for Small Innovators”