I’ve used maps for nearly 20 years to show where poor schools are located and where acts of violence take place…. in an on-going effort to mobilize more people to support mentor-rich non-school tutor/mentor programs in these places.

I’ve also been building a resource library starting in the 1970s when I first became a leader of a volunteer-based tutor/mentor program in Chicago (since 1998 a web library) .

On a regular basis I add new articles to the library and  I use my newsletters, blog articles and social media posts to point to research done by others that reinforce these points, as well as to news stories that bring attention, but not solutions.

In the introduction the first paragraph says “Where one lives may be the most important factor in determining health outcomes. And because of our history of racial oppression and the legacy of that oppression in residential patterns today, the intersection of place and race in the persistence of health disparities looms large.”

The Executive Summary provides this motivation for citizens throughout the Chicago region to be concerned and involved.  “Clearly, there is a strong moral imperative to enact policies to redress the inequities of the past, as well as current inequities, in ways that will improve health for all. But, there also is a powerful economic incentive. A study released by the Joint Center for Political and Economic Studies in 2009 found that direct medical costs associated with health inequities among African Americans, Hispanics, and Asian Americans approached $230 billion between 2003 and 2006. When indirect costs, such as lowered productivity and lost tax revenue resulting from illness and premature death, were included, the total cost of health inequities exceeded $1.24 trillion.7 Thus, for both moral and economic reasons, we must address health inequities and their root causes now.”

In the 2012 article I pointed to this Chicago Tribune article, titled “Violence takes a toll on child’s play.” which also draws attention to “place” and the challenges that face parents, schools and children in these neighborhoods. 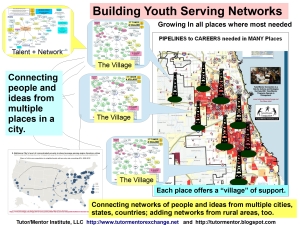 I wrote that “I hope that one of these articles will make some of you concerned enough to launch a “learning group” in your company, family, faith group, alumni group, etc. Only when more people are engaged with the information and actively involved in building youth support programs in all of the poverty neighborhoods will we ever have enough people involved to change these conditions.”

In the five years since then I’ve continued to find research that points to where you live as a determining factor for how you live.  Look in this section, and this section, of the Tutor/Mentor web library.

Today I added two new articles to this library:

Both of these web sites include many additional resources, including ideas for sharing this information.

This month recognizes the 50th Anniversary of the Kerner Commission report on Race & Inequality in America. On Feb 28-March 1 a conference at the Hass Institute of UC Berkeley reviewed progress, or lack of progress. see link

On Twitter the #Kerner50 hashtag will get you into a conversation about this anniversary. For instance, I found this New York Times commentary, by Fred Haas, the last surviving member of the Kerner Commission.

My 2012 article is one of more than 1000 that I’ve posted on the Tutor/Mentor blog since 2005.  I have used printed newsletters (1993-2002), email, web sites and blog articles over the past 25 years to try to draw more people to this information and into discussions and actions that would distribute needed resources and support systems to all of the high poverty neighborhoods of Chicago (and other cities).

For future generations to look back 50 years from now to understand progress made on these issues, new leaders will need to continue building and maintaining web libraries and reaching out to draw people together to read, reflect, discuss and then give time, talent, dollars and votes to support solutions in many places.

If you’d like to help me do this work, or continue it into the future, make a contribution using the PayPal on this page.  Or reach out to me via one of these social media platforms.

6 thoughts on “Where You Live Determines How You Live”